(A) New synthesis of evolutionary theory?

Will the Modern Synthesis of evolutionary theory change to a new synthesis? And, if yes, then how significant will the change(s) in the new synthesis be?

The goal of this first forum (A) is to elicit discussion about an important but relatively sidelined debate about the correct formulation of evolutionary theory. There are calls for an extension (Pigliucci & Mueller 2010), calls for a replacement (Noble 2015), calls for diversity within the current formulation (Pievani 2016), and calls for leaving theory as is (Wray et al 2014). This debate already exists in scattered form; it deserves more attention and this forum seeks to advance that debate while giving it wider exposure.

The following roadmap is a frame for how evolutionary theory might evolve. The points below are an inventory of issues that a new synthesis could incorporate. They are meant to invite discussion and to seek critique, support, and debate.

Evolutionary theory has restricted its field of biological study and turned from questions about the nature of life, including the generative side of a generate/select balance (Reid 2007) and the adaptive side of an adapt/inherit balance (Turner 2017). This restriction has curtailed its ability to understand the origin of life, self-organization dynamics, transitions, and most important, the nature of life.

Current evolutionary theory for the multicellular period of origin and selection of species is already rife with issues on the border of theory that will lead to an extended (Pigliucci & Mueller 2010) or expanded synthesis (more encompassing theory). These current issues can be grouped in at least three categories:

Developmental considerations – The largest critical group of issues are under the heading “evo-devo” (Moczek et al 2015), but these considerations should also mention niche construction (Odling-Smee et al 2003) and cultural evolution (Richerson & Boyd 2005). The conservative view here is given by Wray et al. 2014.

Macroevolutionary phenomena – Further from gene or even organism issues are the issues that investigate larger patterns within evolution. These include the whole biosphere as the only whole entity in evolution (Smith & Morowitz 2016), all multicellulars as being a coevolutionary whole (Butterfield 2011), the coevolution of ecosystems (Temkin & Eldredge 2015), and major transitions in evolution theory (Szathmary & Smith 1995).

Self-organizational patterns – Many issues show self-organizational dynamics that are appear to be independent of the genetics. These include (endo-)symbiogenesis (Kozo-Polyansky & Margulis 2010); convergent evolution (McGhee 2011); systems biology (Westerhoff et al 2009); scaffolding, especially among organisms (Bapteste & Huneman 2018); self-organization itself (Camazine et al 2001); and the network systems of physiology as primary (Noble 2017).

This list is not exhaustive and is meant to begin a list of issues which a future evolutionary synthesis must address.

An ignored era of study within evolution is the prebiotic phase before the appearance of cells. Origin-of-life studies are progressing rapidly and will force two issues that will likely shape ideas about the generative side of biology: 1) the nature of life and its continuity with non-life, which includes the question of whether ecosystems are primary over organisms (Smith & Morowitz 2016), and 2) probable inclusion of novel evolutionary principles into evolutionary theory (e.g. Spitzer 2017).

Evolutionary theory has not yet integrated insights from chemists who claim that chemical evolution is the more primary evolution under which species split up the large scale chemical transformation of the geosphere (Williams & Rickaby 2012).

The above list begins a collection of issues that a future presumed synthesis of evolutionary theory should address. The question of whether a new synthesis is needed is already present in the somewhat mainstream discussion about an extended synthesis. But in a wider perspective, the prospects for a new synthesis are seen to be considerably strengthened by the fast progress that is being made in origin-of-life studies. A graph of this logic is shown below. The two circles on the top line of Graph A are a simple statement of the frequently discussed potential to shift from the current synthesis to a new synthesis. The bottom circle is a claim that origin-of-life studies, a phase currently not studied for its relevance to evolutionary theory, could provide an additional impetus to seek a better synthesis of evolutionary theory. This same graphic motif is included in later graphs for (B) and (C) to show their logic in relation to this theme. 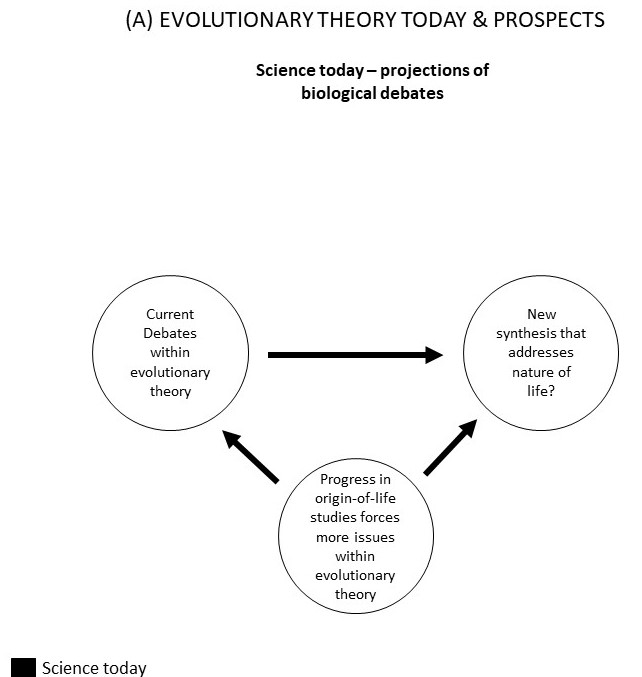