The goal of this site is to promote integration of many loose threads in evolutionary theory across its many debates. This theory is the most important framework for understanding life in the cosmos.

The site is divided into three forums that shift step by step from the science end of the spectrum in steps towards more examination of the philosophical background to questions about evolution.

The first forum (A) examines the question of whether some sort of extension, expansion, or replacement of evolutionary theory is needed.  In the twenty-first century, numerous cases of research in life processes are inadequately explained by the now-standard Modern Synthesis — roughly the gene-centric approach of mid-twentieth century. These are not problems but opportunities to clarify and possibly extend, enrich, or establish a more encompassing theory, a goal expected for most scientific theories.

Unfortunately, signs of theoretical integration are few. More often, intriguing research is ignored in the great but scattered biological-medical complex. This dialogue is given a starting frame under the “(A) New synthesis of evolutionary theory?” topic and is the subject of any posts under an “A” category or an “A” tag. It includes results from origin-of-life research as further inputs to unified conceptions of evolution. If you are a potential contributor, please reply at the Contact page and request access to post.

The second forum concerns the weakly understood evolutionary nature of humans in the civilization phase. This theme is a hybrid of science and philosophy. Its premise is that the novelties of civilization have largely received a pass from evolutionary understanding and are seen as merely the fruits of a “successful” species. This phase is often considered to be the academic domain of the humanities in what is considered a science-arts divide. Aside from the hypocrisy of dividing intellectual life in two, the focus here will be to seriously look at the accelerating dynamics of the modern world in terms of evolution and especially in light of an expected, more encompassing evolutionary theory (Forum A). The second (B) forum is meant to start a scientific and modeling evaluation of whether the unique dynamics of the civilization phase are best understood as biological, evolutionary, and synergistic dynamics.

This civilization-as-evolution dialogue is found under the “(B) Civilization as major transition?” topic or any post under a “B” category or a “B” tag. Again, if you are a potential contributor, please reply at the Contact page and request access to post. A word of warning here: This second discussion is less about integrating existing research than it is to use existing research across many fields such as the social sciences out of the context of its own research to advance evolutionary understanding of our modern world.

The third major theme explores the contexts of philosophy over the course of biological discoveries, including constraints on and possibilities for our thinking about the changes brought up in Themes (A) and (B). This third forum, “(C) Philosophy & Evolution,” will also explore the philosophical and theological ramifications of integrating evolution more closely with human civilization. Evolution is entwined in our worldviews, and we had better keep these in view when trying to disentangle the current disagreements and opportunities.

Evolutionary theory is in an exciting but unrecognized phase of re-integration. Currently, it is changing, but only in Balkanized conversations across the life sciences. Supporting these thinkers in having a more integrated and public conversation should be an important goal for all of us. Meanwhile, evolutionary theory has always had effects on social, theological, and political narratives. It is the primary theoretical foundation of the physical sciences and life and even our lives. Its changing in the near future is not only exciting in itself; it will be a harbinger of changes again throughout our social, theological, and political thinking.

At present, the site is the work of myself, Jake Keenan. Serious contributors are welcome and needed. If you could be a contributor to this blog, please reply at the Contact page and request access to post. The intention of the site is to keep a strict separation between a forum for dialogue on a possibly changing evolutionary theory and my own posts, which tend toward the radical end of envisaging the need for change. Suggestions for and criticisms of this structure are also welcome.

(The graph below gives the discussion outline. Black circles in lower center refer to basic issues for evolutionary theory (A), purple circle in upper center refers to discussion of the place of human civilization in evolution (B), and the two blue circles on either side designate the role of philosophy and theology as both influences on and effects from evolution (C).) 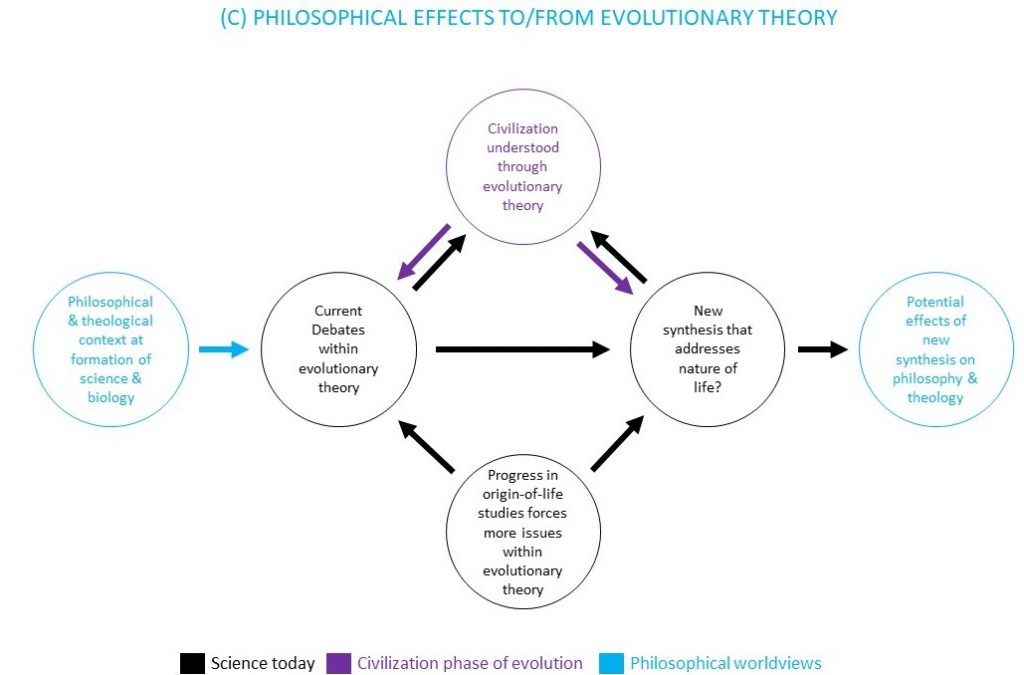