(B) Civilization as major transition?

Should the novel patterns seen during human recorded history be treated as life processes within evolutionary theory? And also, will the insights of a potentially new synthesis for the Modern Synthesis (A) change our understanding of the evolutionary patterns of humans-in-civilization?

A second area of challenge to current evolutionary theory is the gap where evolutionary theory does not attempt to explain or cover the period of human civilization. In general, the genetic story of human evolution shows that Homo sapiens appeared about 200 thousand years ago with some slight variations among populations migrating around the globe since then. There are some new fields on the edge of evolutionary theory that address certain facets of human behaviors, such as cultural evolution (Henrich 2016), cooperative tendencies among humans (Tomasello 2009), studies of language evolution (e.g., Fitch 2010), and studies of specific cognitive abilities (e.g., Michaelian et al. 2016). These are exciting and reveal human abilities that differentiate us from our great ape relatives, but they do not have much to say about the dramatic changes seen over the last 10,000 years, especially the last 200.

If phenomena like the appearance of a pipeline system across the continents, the spread of mutualistic relationships with hundreds of domesticated species, or the proliferation of new chemicals from our industries were seen in any other period of evolution, there would need to be a way for evolutionary theory to address them.

As it stands, whatever happens in history or on today’s news is considered to be in the theater of human greatness rather than within the four-plus billion-year evolution of life. We got the good genes, and now we can do our own thing. This appears to be hubris – on a big scale. Within evolutionary theory, it suggests a significant gap. Within the discussion about a potential new synthesis for evolutionary theory shown in forum (A), the dramatic and accelerating “evolution” during this relatively short period of civilization can be seen as another gap for a new evolutionary synthesis to address. This forum (B) calls out civilization as an era that should be more firmly integrated into evolutionary theory and as yet another source of insights for a further synthesis. Working with the dinosaurs of the deep past does not mean that the coevolution with domesticates today can be avoided. Working with the social life of bees does not mean that the dramatic appearance of cities with 25 million people can be avoided. Working with the origin of life and the chemical changes to the environment does not mean that the stunning chemistry of our industries or the electronic commons of the internet can be avoided.

The problem, of course, is that humans in our modern lives appear to be special while the evolutionary story shows us to have something like 98% of the same genes as chimpanzees. What do we do? Forget about evolution in today’s world? Or shoehorn us into the talented-ape story? Both choices are dead ends that lead to avoiding the subject and instead talking about sci-fi fictions, travel to other planets, extinction, takeover by robots, and other such evolution-free fantasies.

To begin this discussion, the frame of a transition in evolution will be suggested. This is similar to other periods in evolution such as when protocells emerged, photosynthesis appeared, or multicellulars became stable. Evolution occasionally shows periods of more significant change. This touches on the general discussion of macroevolution (e.g., Serrelli & Gontier 2015). Here, a starting point might be the framework of Szathmary and Smith (1995; also Smith & Szathmary 1999) for major transitions in evolution which called out human societies with language as one of seven major transitions since life began. Such an approach would require us to better understand transitions within evolution as well as to understand specifically the dynamics and trends of our current transition.

The issue of civilization within evolution (B) is shown in the graph below as the top (purple) circle and its logical relationships to the existing debate about whether to extend or expand evolutionary theory (A). 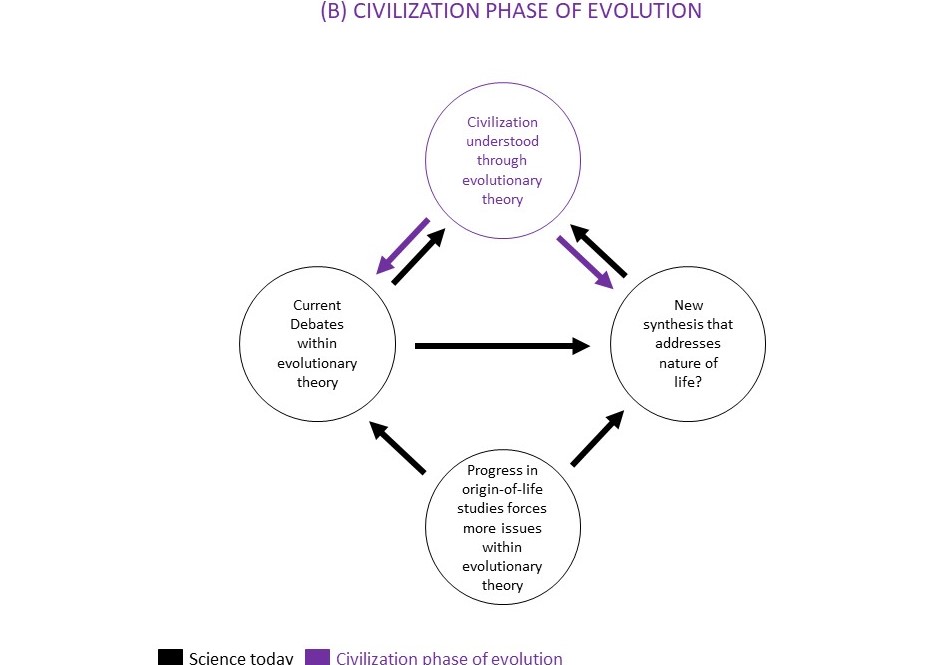