In a post from two days ago entitled “How beliefs about life influenced Darwinism” I described some trends in theology that led up to the Scientific Revolution. My claim was that the assumptions from theology just before the birth of biology shaped assumptions that are still part of our view of life. These include assumptions that: 1) god was an active agent rather than a generalized, creative process; 2) organisms tell us all about life without having to understand any deeper questions about the nature of life; and 3) humans too are best understood as individuals (organisms) rather than as facets of any larger or smaller constellations (seen in the bottom left group of blue circles in chart below).

But biology is changing. Themes (A) and (B) are discussions about these changes and the potential for further changes. In my own posts I have come out strongly to forecast significant changes in evolutionary theory. These include our conception of civilization’s place within evolution as being radically changed and improved. This would mean understanding modern human life – all of it including skyscrapers and the internet – as integrated into the theory of evolving life. If this is true, then these will have momentous implications for theology. If the forecast for theme (A) and evolutionary theory holds such that we see an expanded or more encompassing evolutionary theory, then this will in all likelihood give us a better understanding of the nature of life. An ability to see the continuity of life’s formation in self-organizing processes will give a more resplendent view of life rather than just an accidental phenomenon. And such a view will effectively be the views of what is called process theology. This was the view famously taken by Alfred North Whitehead (1979), a scientist from the early twentieth century and mathematical colleague of Bertrand Russell. This is also very similar to the views of many traditional religions from Buddhism and Taoism to Hinduism. And it is also the view in the older or more mystic versions of the Abrahamic faiths as shown in the upper left blue circles of the graph below.

There is, in fact, an ironic parallel between evolutionary theory and its creationist opponents – a marvelous start for life as an entity/commodity whether from accidental or deity interventionist paths. If origin-of-life studies are able, as scientists generally hope, to show the continuity of chemistry, systems, and earth dynamics of an active matter itself with the first cells, then the default lightning strike notions of the start of life will evaporate.

But it is theme (B) in this blog that tracks the potentially greater change to our theological conceptions. If, as I have argued, civilization marks some type of turning point in the dynamics of evolution on the earth that places humans within dynamics (e.g., coevolutionary grouping with domesticates, a new “metabolism” with economics and its novel energy sources, a multibehavioral trend with an interactively adept species, etc.) beyond mere individuals, then humans and human history become riders in a larger process. Such a view of evolution that includes the dynamics of civilization effectively takes the place of a view of deity as designer of human fates. And it would parallel the conclusion above about a process view of theology. 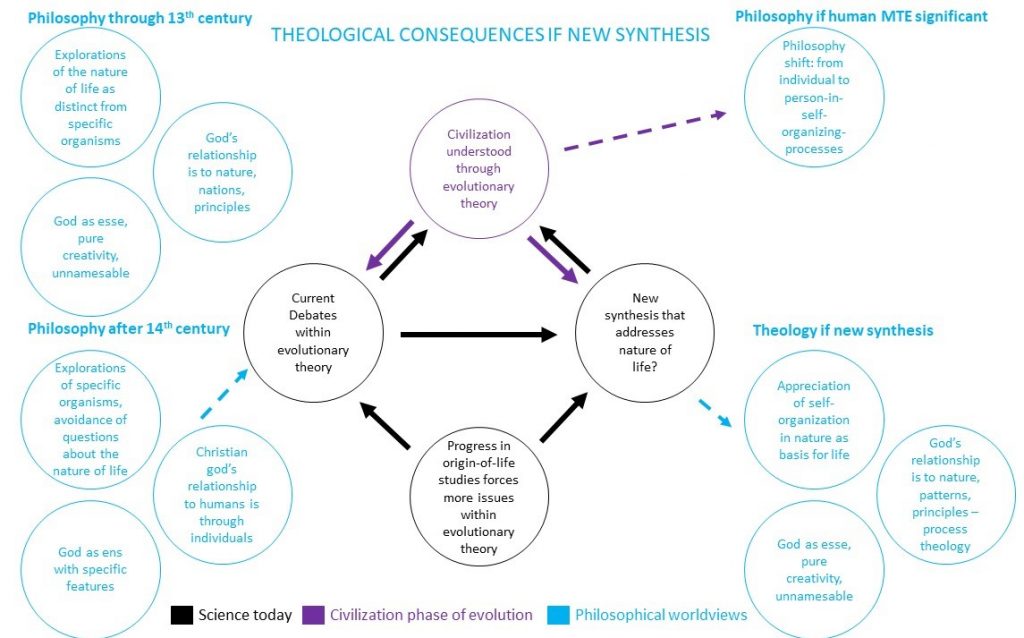 This is all put forward with a lot of “ifs.” Like much of the ideas under theme (C) they depend greatly on the ideas and trends from themes (A) and (B). However, for those of us with both faith in evolution and proponents of its greater depth, it is important to see where the trends lead. Surprisingly, as pointed out here, they show evolutionary theory that absorbs the nature-of-life, unanswered aspects of Darwinism to be very compatible with process theology. And equally surprising, a deeper understanding of civilization and its evolutionary import could very possibly take humans off our pedestal as the supermen who have crowned the evolutionary arc. If this is anything close to the future of evolutionary theory, then evolution takes on the attributes of the creative, process divinity as well as the greater process to humans.