Darwin’s Origin of Species appeared at an auspicious moment in history. The exploration of the whole globe with its strange creatures as in Darwin’s voyage on the Beagle was in full swing, and the hopeful sense of human progress following the Industrial Revolution was in full blossom. But the sciences of mechanics and mathematics as from Descartes and Newton formed a legacy that themselves descended from changing notions of god, humans, and agency. The discussions of evolutionary theory (A) and the evolutionary significance of civilization (B) are inextricably tied to these scientific and theological roots.

Three long term themes in the West are worth tracing. The first is a shifting focus in the life sciences from the general question of the nature of life versus the investigation of specific organisms. The second is the shift in theology over the Middle Ages and into the age of science from a concept-less and name-less view of god to a view of god as having specific powers. The third is a gradual shift in meaning and access to god through tribes, nations, or churches towards this same meaning and access as coming directly through human individuals.

The shifts in these three dimensions can be seen in the graph below in the two groups of three circles on the left that chart their changes from ancient times into the late Middle Ages and the beginning of science. 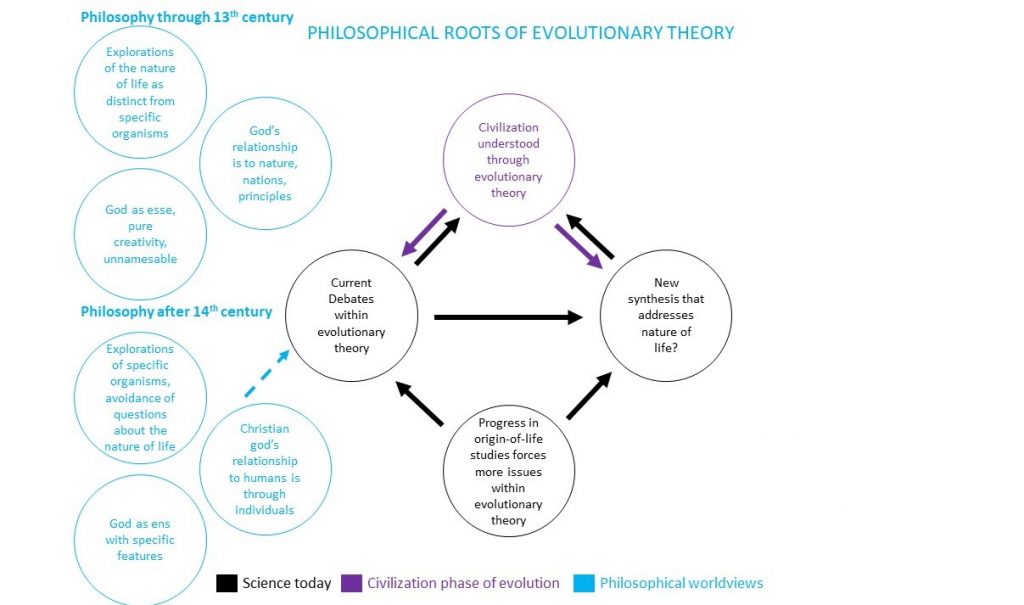 The top circle of each group of three circles charts how an initial focus by Aristotle, considered the first biologist, on both questions – the nature of life and specific organisms – changed dramatically with early scientists who did not want to bother with the silly questions about the nature of life and wanted to study specific organisms only (Thacker 2010). In this view thinkers of the early Middle Ages like the Scholastics had concerned themselves with the opposite choice – understanding the nature of life only which they conflated with the nature of god. They did no experiments on or collections of specific organisms and then spun out on the general question. This dimension of philosophy nicely shows how biology today has made a wise choice but nonetheless has limited itself because it decided to essentially abandon the question about the nature of life. Now there is no definition of life nor any understanding of what life is. There remain many attempted definitions some of which are tautologies such as anything that can undergo Darwinian evolution.

The bottom left circle of each group of three circles on the left marks the dimension in how conceptions of god changed. Since ancient times there had been a tradition among theologians to treat god as pure creativity, as unknown and unknowable, as even unnameable. With the Nominalists around the beginning of the fourteenth century God was seen to share certain features with his/her creatures (Gregory 2012, pp. 36-8). The ineffable became another member of the parade. This reinforced the previous trend away from a pure, creative nature of life and towards a chief puppeteer notion of god. This then facilitated early biologists to explore organisms to discover god’s mechanics (Riskin 2016). But their very success in growing understanding moved the sense of empowered understanding over to humans as the all-knowers (Gillespie 2008, p. 273) while matter became a passive matter that was only subject to the laws of physics or their interventions (Riskin 2016).

The bottom right circle of each group of three circles on the left shows the growing focus on human individuals over the tribal or social person (Siedentop 2014). The centrality of the individual shows up in the importance attached to human individuals as the site of evolutionary success rather than any group-spanning collectives. Humans are the sum total of individuals in both social (Smith 2016) and evolutionary narratives.

Here then are three key values that accompanied the birth of modern biology and evolutionary theory. In later posts I will point out how the changes being contemplated in topics (A) and (B) of this website point back towards earlier notions of a radical creativity for life/god, an active matter of self-organizing potential in life’s processes, and collective or extended dimensions for the lone human individual. Scientific theory, especially about life, does not happen in a vacuum to our values.